The question how communities of animals and plant assembly has always been at the heart of ecological research. It was the seminal work of Jared Diamond who linked the different approaches to community assembly and provided a conception framework to study the pattern of species co-occurrences. Diamond?s vision of communities was based on the competitive exclusion principle and predicted mutual species exclusions of species with similar ecological requirements. This framework initiated a heavy and ongoing discussion about the importance of competition in ecological communities but also helped to develop appropriate methodological and statistical toolboxes to disentangle different processes of community assembly. Mainly in cooperation with Nick Gotelli from Vermont University we developed a comprehensive methodology for the study of community assembly based on a set of metrics and associated null models to study patterns of species co-occurrences and to link these patterns to environmental correlates and phylogenetic constraints. This toolbox is now widely used in community ecology.

Meta-analytical studies have shown that negative temporal and spatial species associations prevail within local communities, although by no means dominate. These findings indicate that in sufficiently stable environments niche and species interactions might drive community assembly in the tradition of Frederick Clements and that they might dominate over neutral (random) assembly as envisioned by Henry Gleason and formalized by Steven Hubbell.

Our results do not support this view.

Together with Franck Jabot from the Laboratoire d’Ingénierie pour les Syst?mes Complexes in Aubi?re, France and Nick Gotelli we were able to show that competition alone is not able to generate strong negative species associations within the observed range of local species richness. Instead we favour a largely neutral assembly. 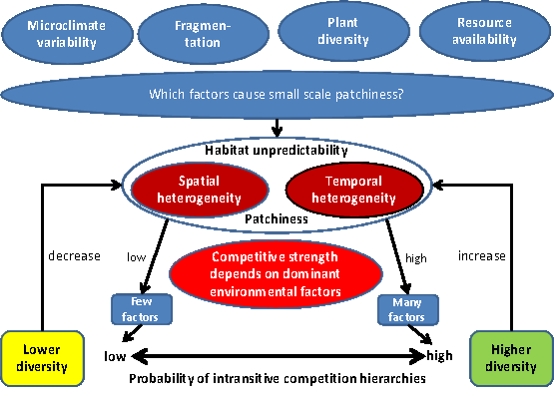 Our highlights from the recent grant 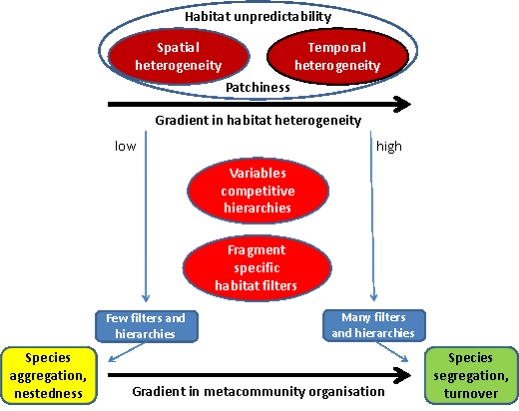 We succeeded in performing a detailed simulation study to infer patterns of species co-occurrences and abundances based on a neutral, ecological drift model on community assembly. This model was enriched by transitive and intransitive competitive interactions. 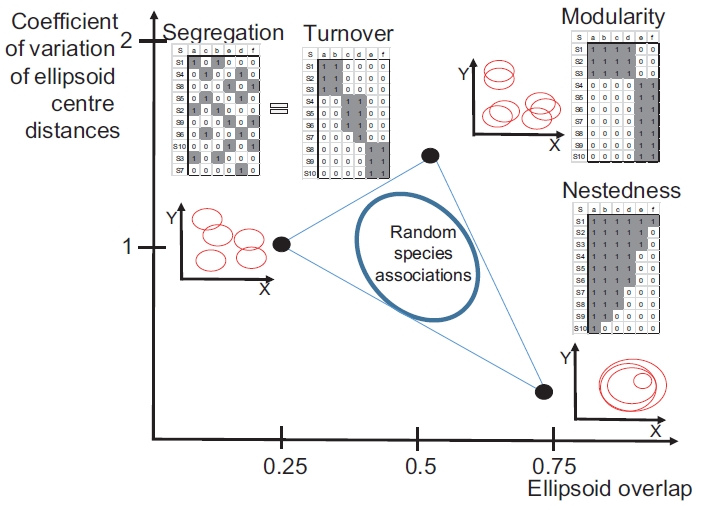 Astonishingly, despite of the long ecological tradition of studying competitive interactions and community assembly in natural systems, and despite of the enormous amount of theoretical approaches there is a clear lack of highly resolved field data to test existing hypotheses on plant and animal community structure.

We applied a new approach to plant data

Papers are in preparation.

Global databases contain many data and mysteries, but also many opportunities to resolve these mysteries around the biogeography of community assembly.

A general model of community assembly that emerges from our studies on understorey plant communities: 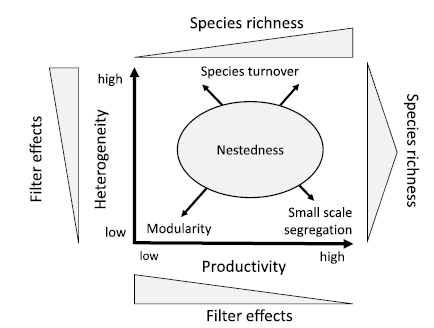