Post-transcriptional regulation of gene expression in Eukaryota is a complex and multistep process, comprising a cascade of events taking place in both nucleus and cytoplasm. A number of the cytoplasmic post-transcriptional mRNA processing steps take place in highly specialized, evolutionary conserved microdomains, referred as to cytoplasmic bodies. Cytoplasmic bodies function as specific centers of balance coordination between mRNA translation and degradation, which results in gene expression on proper level. 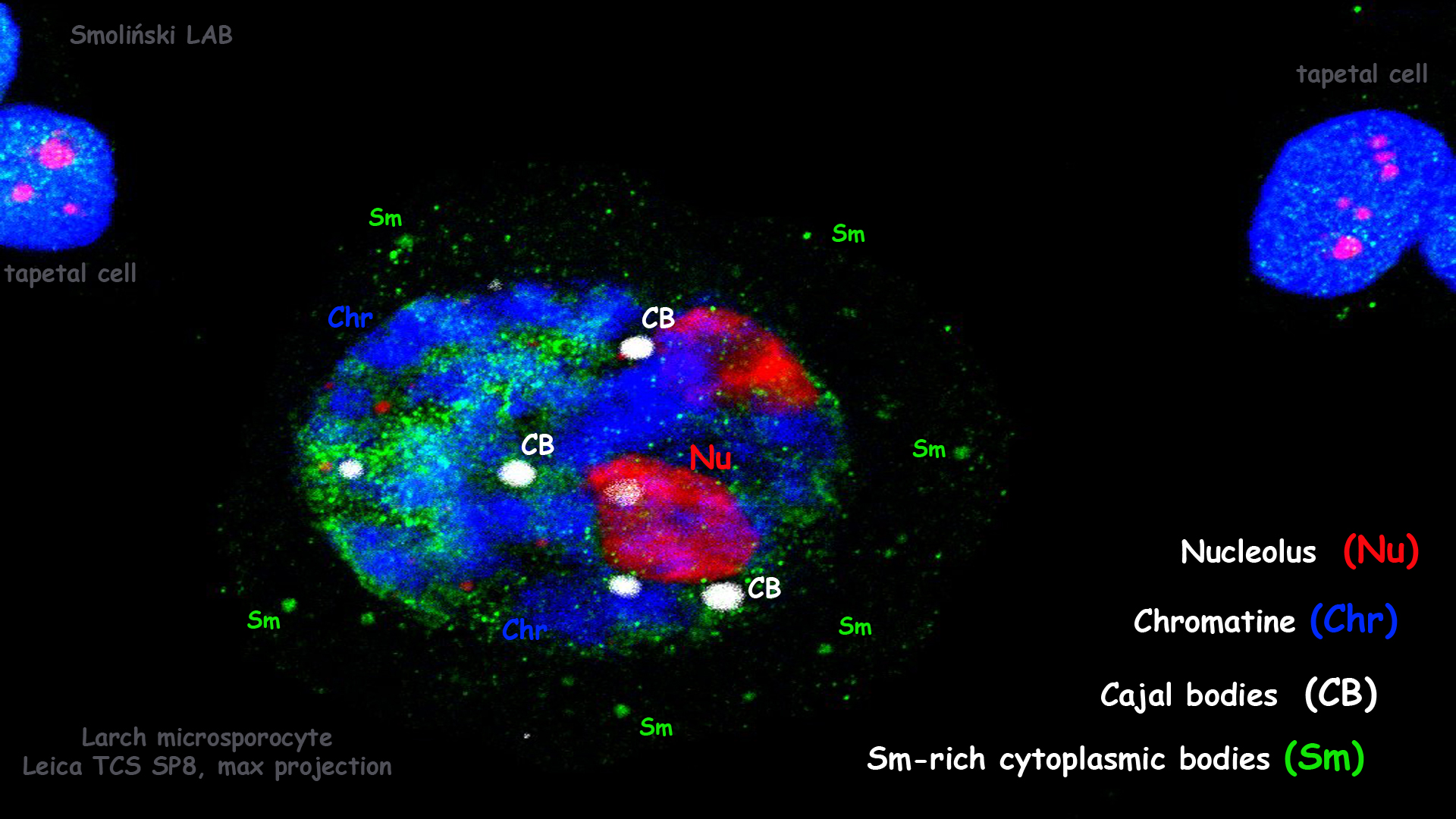 Our research revealed cyclic occurence of large, spherical cytoplasmic bodies enriched in Sm proteins and polyadenylated RNA (poly(A)RNA) in larch microsporocytes. Sm proteins play a fundamental role in pre-mRNA splicing as being core component of snRNPs. To date, however, the literature lacks information concerning interaction between mRNA and Sm proteins in processes other than splicing in plants. Given this, we find our observations particularly interesting, since larch Sm-rich accumulations lack other elements of spliceosomal units (UsnRNAs, U2B”, m3G cap), which indicates a novel role of Sm in mRNA cell cycle in plants.
In order to identify which mRNAs are accumulated within Sm-rich cytoplasmic bodies, we applied RIP-seq approach of Sm-RNA complexes from cytoplasmic fraction of larch anthers. Transcriptomic analysis revealed hundreads of unique mRNAs. The identified transcripts could be divided into 3 major classes: those encoding ribosome/translation-related proteins, as well as mitochondrial and chloroplastic proteins. Finally, in situ localization of selected transcripts confirmed its accumulation within Sm-rich cytoplasmic bodies (Hyjek et al. 2019).
Based on our results we propose that evolutionary conserved Sm proteins have been adapted to perform several functions related to posttranscriptional regulation of gene expression in Eukaryota, which presumably enabled them to coordinate the interdependent processes of splicing and further mRNA
maturation. Our observations are the first to report the participation of Sm proteins in post-transcriptional regulation of gene expression in the cytoplasm in the plant cells.